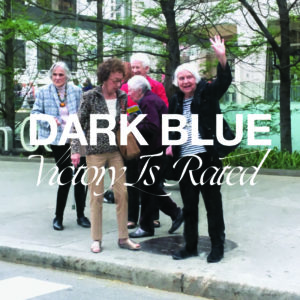 ‘Victory Is Rated’ is the 3rd studio album from Philadelphia’s Dark Blue, following 2014’s ‘Pure Reality’ and 2017’s widely acclaimed ‘Start Of The World’. Over the course of the last half decade, the ensemble —helmed by Clockcleaner / Puerto Rico Flowers founder John Sharkey III, have walked a thin line between defiance and fatalism, often trading in the anthemic with equal doses of the sardonic and the melancholy. That all of it is increasing informed & influenced by the real goddamned world probably helps. 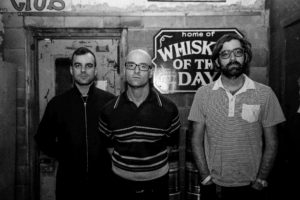 There’s some cruel irony in Sharkey’s (second) self-imposed exile from the USA occurring right after completing the recording of ‘Victory Is Rated’ with conspirators Andy Nelson (Ceremony), Michael Sneeringer (Strands Of Oak, Rosali) and B. David Walsh given that this is by far, Dark Blue’s most fully realized statement — in some alternative universe where this band toured consistently, they’d be way too big for this label (frankly, they already are), but really, what has America done to actually deserve their brutal honesty?

Sharkey says the album’s main themes are class war and mortality. I’m not entirely sure there are other themes (not simply on ‘Victory Is Rated’, either) , but we’re very fortunate he’s so skilled at writing about those two. He also likens the record to “if Blitz went Brit pop” and while that ticks off a couple of crucial boxes for me, let’s get something rather thorny out of the way. However many allusions you’ve seen to some subculture you either dislike or can barely be bothered to skim the surface of on a Dark Blue flyer, this is not a high (?) concept series of mannerisms disguised as a gloriously powerful rock band. Dark Blue is a gloriously powerful rock band. For all time.