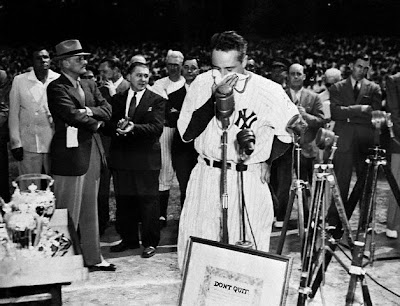 [Bronx fans predict the Captain will chase another Gehrig milestone and live to see his 38th birthday.]

Yankee fans finished throwing Lou Gehrig’s legend under the proverbial bus this evening by celebrating Derek Jeter’s ascension to the top tier of the second-tier of the top 100 hit leaders in baseball history.  In other words, he’s now #52 on the all time list, tied with the Roberto Alomar.  Gerhig’s career and stats were cut short by ALS, aka Lou Gehrig’s Disease, but that didn’t seem to register in a new Yankee stadium whose new owners will apparently hype anything to claim some Tradition on their watch.  In this non-event, The New York Times’ Jack Curry sees echoes of Ripken breaking Gehrig’s true legacy,Gehrig’s 2,130 consecutive games streak. I can’t wait to see the celebration in the Bronx when Jeter manages to live to be 38. Take that Gehrig!  Mr. Curry reports:

Derek Jeter energetically bounded from player to player with questions during his first All-Star Game in 1998. When Jeter found Cal Ripken Jr., he told Ripken that he usually felt weary after playing for two weeks. So, Jeter wondered, what was Ripken™s secret for playing in so many consecutive games?

Cal Ripken Jr., left, says he was impressed by Derek Jeter™s maturity level when Baltimore played the Yankees in the 1996 American League Championship Series, which the Yankees won.

It was a bland answer, the kind of answer Jeter has repeatedly given throughout his career. But Ripken said he could sense that Jeter, who was giddy as he quizzed the other All-Stars at Coors Field, was disappointed. Jeter wanted more insight about how Ripken had worked day after day after day.

œI could tell, Ripken said, œthat it wasn™t the right answer for him.

When Ripken discusses Jeter, he typically tells the 11-year-old story about failing to satisfy Jeter™s curiosity. With Jeter collecting his 2,722nd career hit Friday night, Ripken has another story to tell about Jeter because both men share the distinction of having passed Lou Gehrig for a milestone.

Ripken, of course, holds a monumental record, one that was supposed to be untouchable before he broke it. He surpassed Gehrig™s streak of 2,130 consecutive games played and pushed his streak to 2,632 before taking a day off with the Baltimore Orioles in 1998. Jeter supplanted Gehrig as the Yankees™ career hits leader with a single off Baltimore™s Chris Tillman in his second at-bat.

In Honor Of The Mets’ Official/Inevitable Elimination From Postseason Contention….

The Times’ Rhoden On The Mets’ New Look