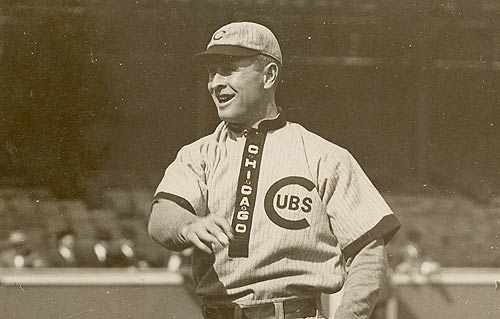 [Hoy! Hoy! This week, The NY Times declares the Cubs baseball’s perfect team, and The Trib? They say all that stands between the Cubs, a World Series title, and Century of Failure #2, is new uniforms?]

The Cub police blotter this week includes debate of Mark Cuban’s SEC indictment for insider-trading. Here, The New York Times’ Harvey Araton actually argues that once this SEC thing blows over, baseball owners will take cuban under their wing to find a franchise in need of his talents.  At first I thought he was kidding, but:

Suppose Cuban did gain controlling interest and managed to turn the Cubs into a World Series champion, breaking a drought that dates to 1908. Would that really be in the best interests of baseball? Aren’t the Cubs, in their inevitably and appealingly tragic role, just about perfect the way they are?

If baseball is smart, it will encourage the Tribune Co. to choose among other reported bidders, so long as the terms are not embarrassingly inferior to Cuban’s, and everyone is convinced the team would not be run on a shoestring. Then commissioner Bud Selig and friends will sit down with Cuban and figure out how to get him a franchise that could really use his willingness to invest, transform and self-promote.

Sure, in the same friendly way baseball owners colluded to expel are waiting to bring Barry Bonds back at the right time?  Well, the police blotter has other issues this week. The Chicago Tribune’s Melissa Issacson reports that 21-yr.-old Cub minor leaguer Julio Castillo’s temper tantrum toss of a hardball at the Dayton Dragons dugout, which ended up hitting a fan in the stands, has resulted in two counts of felonious assault aimed at him in return (and with much better accuracy). Dayton fans immediately hailed the indictment, and removed the sympathy factor from their defense, by filling up the their fan site with racist threats against Castillo. Meanwhile, JC’s lawyer claims he threw into the crowd out of fear.  Considering the fan comments, that’s now plausible.  Hopefully, Castillo’s lawyers can blame the Cubs farm system for his control issues, and you know, put the whole damn system on trial.

The Cubs’ roster went a little further towards solidifying today with Ryan Dempster signing for an estimated $50-52 million four-year deal.  The Sun-Times Gordon Wittenmyer reports it here.  GW also mentions continuing interest in a one-year Randy Johnson deal (if you were Lou Piniella penciling in “Jason Marquis” one more time you wouldn’t think it so crazy) and possibly Rafael Furcal from the Dodgers.  The hold-up in the Dempster deal was time and money issues, similar to what sent Kerry Wood packing (finally).

Apparently, Trib columnist Rick Morrissey has detected a frustration in Cub fans re the issue of the World Series, writing:

Think about this: If the Cubs were to win 120 games next year, they would be the most meaningless 120 victories in human history. The only thing that will matter is the postseason.

When a club has gone a century without winning a title, it’s difficult to toss around words like “epic” or “devastating” to describe a particular season or a particular playoff collapse. You go 100 years without a World Series title, you find all sorts of ways to lose, big and small. There’s a decent chance some losses will kick you harder in sensitive areas than others.

Actually, that was 2008, in case Morrissey missed every game at Wrigley last season or failed to note a single blog.  The 100 years/Our Year story was all over baseball news in 2008.  101 doesn’t have the same ring to it, nor will the Cubs be the focus of national scrutiny until a World Series appearance.  It’s a tired story, back to just being a punchline.  Me, I think the pressure is off the Cubs in the sense that they have already failed to produce.  They have been there, with the chips way up, and still let us down.  It sucks, but when the worst happens, as it did, apprehension usually fades.  Nowhere to go but up, you know?  Anyway, Morrissey’s solutions:  new uniforms, sign a Manny Ramirez, and Piniella “ just named manager of the year “ needs to be more “fiery.”  It’s time Morrissey disclose his family tree (including in-laws possibly named Zell) and, or, the incriminating photos he has of Trib executives, so we can better understand how he has a job.   I cop to loathing those Wrigley designed candy ass Cub uniforms myself.  But how bad does a uniform have to be when your team name is “The Cubs?”  Hats with spikes?

And finally, the Trib‘s Fred Mitchell reports that former Cub and current ESPN analyst Rick Sutcliffe, apparently unconcerned with conflict of interest issues, got personally involved in selling Jake Peavy on relocating to the North Side, where he would join Zambrano, Hardin, Theodore Roosevelt Lilly, and Dempster.  Mitchell’s interview with Peavy’s agent Barry Axelrod also explains why any deal anywhere for Peavy has run into a General Motors-sized ditch.  Apparently, it was self-created by Axelrod, who explains it for unknown reason.  That is, why go public with all your limitations if you’re repping Peavy?

“Rick Sutcliffe is not officially recruiting, because he is not in an official capacity with the Cubs,” Axelrod said. “But he has certainly extolled the virtues of being a starting pitcher with the Cubs.”
Peavy won the Cy Young Award in 2007, when he went 19-6.

“Rick was in the Padres organization as a volunteer minor league instructor and then as a broadcaster. He knows Jake quite well,” Axelrod said.

Axelrod said there are more than five teams to which Peavy would agree to be traded. The widely reported list of five “is not definitive, it is not all-inclusive,” he said. “There are more than five teams. And there are some teams that have pretty much taken themselves out of it. They either don’t have the need or they don’t have the financial resources or the prospects to make the deal.”

Axelrod is accustomed to public posturing by baseball officials.

“It’s like me saying, ‘Hey, I’ve got this car, I can’t afford it anymore, I need to sell it, and you’re the only guy I’m going to talk to about selling it. How much are you going to give me for it?’ By being so public [with a list of possible trade partners] ¦ it is making things a little more difficult.

Armando Benitez, Bob Davidson & The Balks Heard ‘Round The World

2 thoughts on “Your Cub Update: Our Year 2.0 Begins, Dempster’s $52-mil Contract, Fear and Loathing in the Cub Police Blotter, and a Rick Morrissey Expose Blows the Lid Off Chicago Sports â€“ Wrigley Wants a Winner!”