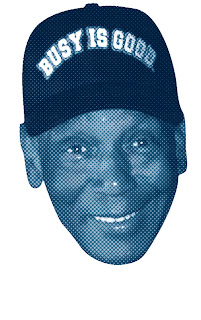 [Ernie Banks, set to resume his duties as HR king of shortstops in 2009.]

Like most of you, when news breaks in the baseball world, the first question I ask is, “How will this effect the Cubs?”

Case in point, the current A-Rod meltdown and its many beneficiaries:  Guy Ritchie, Derek Jeter, the CSTB comments section, and Mr. Cub himself, Ernie Banks.  Banks found himself eclipsed in the record books during one of A-Rod’s admitted steroid years, and the Trib’s Fred Mitchell makes the argument here that Banks is once again shortstop royalty.  Btw, Mitch has some interesting facts about the recent Soxfest held at that White Castle at 35th and King.  Specifically, Sox players signed 17,000 autographs, meaning that every Sox fan at the Cell’s Opening Day will walk away with at least two.  Says Mitchell:

Monday, Rodriguez confessed to using steroids from 2001-2003 while with the Texas Rangers. He hit 47 home runs in 2003, his last year as a shortstop.

In 1959, Banks hit 45 home runs, drove in 143 runs and hit .304 to earn his second straight National League Most Valuable Player Award. He also set a major league fielding record for shortstops by committing only 12 errors in 155 games. His last season as a full-time shortstop was 1960, as leg injuries limited his range. Banks became the Cubs’ first baseman in 1962.

Rodriguez confirmed during an interview with ESPN‘s Peter Gammons that he used performance-enhancing drugs. “I was young, I was stupid, I was naÃ¯ve, and I am very sorry and deeply regretful,” he said.

Word on the street: Current and former White Sox players, broadcasters and team personnel signed more than 17,000 autographs and posed for more than 3,000 photos over the three days of the sold-out SoxFest.

Ryan Dempster On Valvoline, Vaseline And All The Things Inbetween