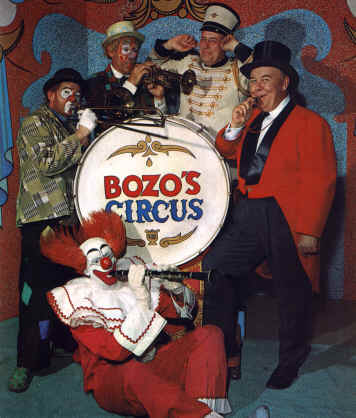 Larry Harmon, aka Bozo the Clown, inspiration for Dan Castalanetta’s Krusty the Klown on The Simpsons, passed away on July 3rd in Los Angeles, at age 83. I got to see Bozo’s Circus live once when I was 7. My mom put our family on the waiting list, and three years later we got tickets. My little sister got picked to play the Grand Prize Game “ wherein you have to toss a ping pong ball into six buckets lined up in a row, the sixth and furthest away being the grand prize. Anyway, she was too nervous to do it, but we got front row seats. My only contact with Harmon was when he walked past us during a commercial break. He looked at my brother, who has curly hair, and said, “You’re curly.” Then he looked at me and said, “And you’re squirrley!” Bozo, along with Ray Rayner and Friends and Frazier Thomas’ Garfield Goose show, was one of a trio of great live shows for kids you could see every week day on WGN. Slowly but surely all those shows faded away to be replaced by reruns and then WGN as a WB Network (?) affiliate. The only thing left from that era are live Cub games and possibly Orion Samuelson’s farm reports. Are they still on WGN? I guess Tommy Skilling’s weather reports on WGN count. Skilling that is, as in Jeff Skilling, the convicted Enron executive and Tommy’s brother. The Bozo show lasted the longest of all of the kid shows. I was saddened when it was canceled (not that I had thought about it in years). The pain was numbed somewhat by Billy Corgan leading the Bozo band in its last episode, which made it more of a mercy killing. The clowns on the show included Cooke (Roy Brown) and Whizzo the Wizard (Marshall Brodean, inventor of TV Magic Cards). At 6, I remember laughing hilariously the day Harmon referred to a hamburger as a “hang-e-booger.” I laughed just as hard in my 20s when my friend Jim Zulevic told me about Harmon backstage at Chicagofest. Harmon waited for the emcee to bring him on, in his clown suit, smoking, then bitching when the emcee basically said, “And now, Bozo the Clown!” Harmon dropped the cigarette, stepped on it with his big clown shoe, and said “You call that a fucking intro?” He then did his big trademark clown laugh as he walked out. Well so long Bozo, you clown. I am sad to know you’re gone. Yr pal, Squirrely.

1 thought on “Clown Dies, and I Don’t Mean Jesse Helms”