I bought two baseball books this summer, Cait Murphy™s Crazy ™08, a history of the 1908 NL pennant race (the last season the Cubs won the Series, sorry to blow the ending for you), and Leigh Monteville™s Babe Ruth bio, The Big Bam.  Being that it is September and Cub World Seriousness is in the air, I thought I better read Murphy™s book fast before a collapse that puts the Cubs and my interest in this book on the shelf for a few years.  Besides, I™ll never like Babe Ruth, so that book I can pick up any time.

I can recommend Crazy ˜08 to CSTB œreaders for its accounts of on-field drunkeneness, cheating, rampant pagan superstition, crooked gambling, nicknames (œDick Nose Herzog comes to mind), and the Chicago Tribune™s summation of the 1908 Phillies (after multiple game beating of the Cubs) as œman-eating Quakers.”  There’s the sideshow, but as Murphy points out, baseball by 1908 is a refined science.  Anyone reading today can appreciate the skill, talents, most stats, and the intelligence of diamond generals like John McGraw and Frank Chance in the final decade before power ball takes over.

This is the dead ball era, one in which the inventor of the hot dog, the scorecard, and the man who hired the scout that spotted Honus Wagner is the same fellow, one Harry Stevens. This is an era when Giants manager John McGraw partners in a pool hall with gambler Arnold Rothstein, but player gambling is considered impossible as it is clearly against the rules. In 1908, a Cub manager, Frank Chance, can say, without needing to time a laugh from anyone in ear shot, œWho ever heard of the Cubs losing a game they had to have?  It™s an era where Phillies catcher Red Dooin, sitting in a train station, gets $40,000 dropped in his lap by a Giants™ catcher, most likely Roger Bresnahan, to throw a game for New York.

At several points, one is worn down by the sheer number of stats, disputed calls and plays, scores, pitch counts, and personalities Murphy relates.  She has to, though, as telling the story of any baseball season, even one that basically involves three or four teams (she leaves out the AL race except for a chapter), is a monumental task of storytelling and organization.   You have to commend her for finding any narrative in the mass of numbers, dates, and subtle factors going into an entire baseball year (off season, too), not just the major games she covers. 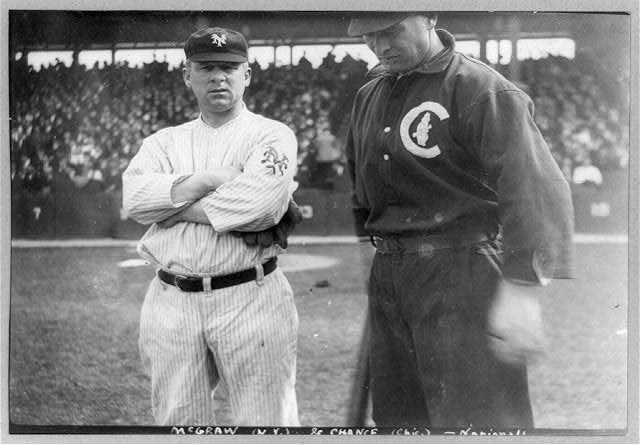 Murphy does this by giving some decent background on the business, politics, and culture that produces baseball 1908.  A series of œtime out sections allows her to shift to different areas outside the game, giving some context as to why the players lived as they did.  To some, our era of winning by any means via steroids, in which players consort openly with drug dealers, feels like a low point.  So, Murphy’s tales of hardscrabble players ruthlessly trying to escape lives spent coal mining or farming, who resort to bribes, brutal spikings, and simply cheating to get ahead, doesn™t surprise any more than learning that they stole signs, too.   In 1908, Ty Cobb™s attempts to get the Tigers to agree, in writing, to pay his hospital bills for injuries or guarantee his paycheck if disabled for the season, are laughed out of the room and derided by the press.  Three-Finger Brown got his name from a childhood accident that mangled his hand in a feed chopper (a close-up photo of his hand is included by Murphy).  Brown kept the chopper on display for fans outside his gas station in Terre Haute, Indiana after he retired.  Drunkenness, nervous breakdowns, fan violence, cops refusing to protect visiting players from bricks thrown their way “ 1908 shapes heels like Cobb, McGraw, and Comiskey as much as today’s world defines Barry Bonds, Roger Clemens, and Mark McGwire.

Still, greatness shines through.  It™s why one reads about these people with interest a century later.  Brown, Matthewson, Wagner, even the courage of umpires like Silk O™Loughlin and Hank O™Day in making crucial calls against home teams and their thug fans, give one pause at the level of talent in the game of the day.   As Murphy points out, football and basketball from the distant past often looks crude and simple.  By 1908, teams use stopwatches to time throws from catcher to second base, “inside baseball” had been mastered in a pre-Ruthian era, and the nuances of throwing spitters alone could fill a book, much less the still legal variations of pitching baseballs.  Crazy ’08 ends abruptly, with Murphy arguing that the 1908 World Series was a let down after the amazing run that led up to it.  If I wasn’t a Cub fan, I might agree.

The Yanks’ Andy Phillips Surrenders (But Doesn’t Give Himself Away)