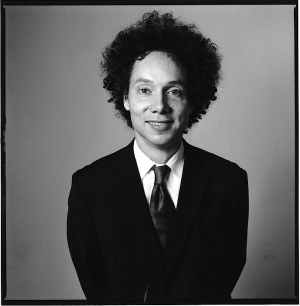 [Not haircuts!  Those are Gladwell and Pinker’s actual brains, which no human skull can contain.]

This Sunday, The New York Times published Harvard Prof Steven Pinker‘s review of Malcolm Gladwell’s, “What the Dog Saw.” Gladwell is a statistician of “minor genius,” in Pinker’s view, but MG is just wrong to cite analysis from two scientists that “quarterbacks taken in positions 11 through 90 in the draft actually slightly outplay those more highly paid and lauded players taken in the draft™s top ten positions.”

In his posted reply today, Gladwell calls Pinker a Harvard motherfucker “accomplished,” if still stuck on “the lonely ice floe of IQ fundamentalism.” Yes he went there!  Come on, you knew that was coming!

It was Gladwell in 2005 who ripped apart the whole notion of Harvard elitism in his New Yorker piece, “Getting In,” so you know It’s On.  Thus, Pinker finds himself on the business end of a Gladwell quadruple-digit IQ blast, race card included:

I wondered about the basis of Pinker™s conclusion, so I e-mailed him, asking if he could tell me where to find the scientific data that would set me straight. He very graciously wrote me back. He had three sources, he said. The first was Steve Sailer. Sailer, for the uninitiated, is a California blogger with a marketing background who is best known for his belief that black people are intellectually inferior to white people. Sailer™s œproof of the connection between draft position and performance is, I™m sure Pinker would agree, crude: his key variable is how many times a player has been named to the Pro Bowl. Pinker™s second source was a blog post, based on four years of data, written by someone who runs a pre-employment testing company, who also failed to appreciate”as far as I can tell (the key part of the blog post is only a paragraph long)”the distinction between aggregate and per-play performance. Pinker™s third source was an article in the Columbia Journalism Review, prompted by my essay, that made an argument partly based on a link to a blog called œNiners Nation which in turn makes reference to a œstudy of quarterbacks conducted by a fantasy football website. I have enormous respect for Professor Pinker, and his description of me as œminor genius made even my mother blush. But maybe on the question of subjects like quarterbacks, we should agree that our differences owe less to what can be found in the scientific literature than they do to what can be found on Google.

Lough : “No Idea” Why Grady Jackson Was Cut