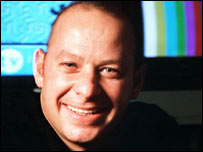 Former Crystal Palace chairman Mark Goldberg (above) blew a not-so-small fortune on dubious transfer deals and crazy salaries. He’s made an unlikely return to football as the manager of the Ryman Premier League’s Bromley side, winners of 14 of their last 19 matches, and today aiming for a giant killing when they take on Gillingham in the first round of the FA Cup. The Guardian’s David Ornstein gives Goldberg a slight reputation boost, saying the onetime boardroom buffoon “inadvertently condemned his boyhood club to the verge of liquidation.”

“I lost my entire wealth but I didn’t lose the ability to work hard. All of your materialistic possessions can vanish but you always have the knowledge of how you built every brick of the business that generated those materialistic things in the first place.”I got involved in a big man’s game and you’ve got to be able to take the knocks. I don’t blame other people, I take responsibility and I get on with my new life.
“It has put a smile on a lot of faces, there has been a good buzz around the place,” says Goldberg. “The FA Cup does that to everybody involved and we just want to make sure we put on a big performance. Gillingham are beatable and on our day this team can cause an upset.”

“I’m much happier in the dugout than in the boardroom and maybe that’s what I always wanted, but it was never going to happen at Palace,” he explains. “The next best thing was to own the club and to have some sort of control over the football but it’s the football I love, not the chairmanship.”

For those needing a refresher course in how Goldberg inadvertendly put Palace in the crapper, current chairman Simon Jordan (not exactly the most sympathetic character on Earth, either) collected some highlights in The Observer last January.

In 12 months, Goldberg lost £1m on agent fees. He paid Boca Juniors £187,000 for defender Walter del Rio, plus fees to multiple agents totalling £450,000. It then emerged that the player had been available on a free, and that documents showing his registration with Boca had been forged by a third party in Argentina. The money was never traced, and the player moved on after one league start.

He paid Israeli club Maccabi Nevealon £800,000 for unknown defender David Amsalem, via a third party. Only £11,600 ever arrived at Maccabi Nevealon, and the player was released after six starts. He signed Chinese players Fan Zhiyi (above) and Sun Jihai – now at Manchester City – for £1m, and only £600,000 arrived in China. He signed two bewildered wonderkids at the same time as Del Rio – Pablo Rodrigues and Cristian Ledesma from Argentinos Juniors – who went home before kicking a ball. The money paid for them wasn™t traced.

Hammers Knocked Out Of The Worthless Cup