Skip to content
Today, Jim Riggleman fired his corporate bosses and the sports world (or at least the fan boy press) is appalled. Players and managers are supposedly overgrown, lucky kids who don't get to make decisions like that. 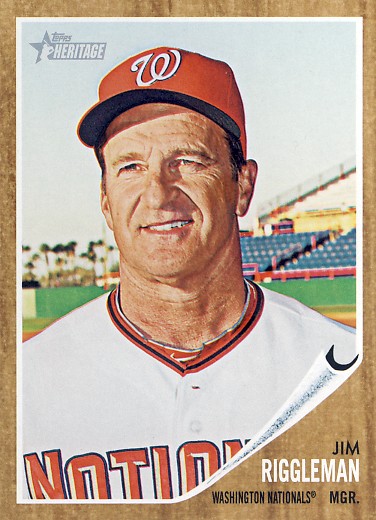 [Pictured, this week’s Most Hated Man in Baseball, Jim Riggleman.]

Today, Jim Riggleman fired his corporate bosses and the sports world (or at least the fan boy press) is appalled.  Players and managers are supposedly overgrown, lucky kids who don’t get to make decisions like that.  Unbelievably, Jim Riggleman doesn’t seem to care if he ever manages an MLB team again – every sports writers’ dream job.   He sold out his team, he doesn’t care about winning, what would Lou Gehrig say, etc, etc.?

The Nats are at .507, their best in six years.  They lose overall for a reason and Riggleman isn’t it. He’s not alone in letting DC fans down.  But let’s put that in perspective.  He’s not deserting fellow soldiers in Afghanistan, he’s a placeholder manager quitting a placeholder club intended to soak up $$$ the Orioles apparently can’t sponge effectively themselves.  At least, that’s how its owners and MLB treat it. In the midst of the Bud Selig era of $$$ > winning baseball, Riggleman’s me-first move today is small potatoes compared to what the Ricketts and McCourts are currently pulling as the Selig-approved stewards of Wrigley Field and Chavez Ravine.  And neither of those teams are winning.

So, Riggleman left his pennant-guaranteed .507 club high and dry because he didn’t get the deal he wanted.  Owners do that every day, as is their privilege as “businessmen.”  This is the same Riggleman who Watched the Padres deal Gary Sheffield and Fred McGriff out from under him in their “fire sale.” Do owners ever get blackballed for such bullshit?  Do we ever hear how they’ll never work again, no matter how much they sell out the concept of winning?  I’d like to see MLB impose a rule that says owners with sub-.500 teams for five years running be put under suspension and review like the McCourts have been for financial incompetence.  But that would mean winning really is what baseball is about, for all involved, and it’s not. If sportswriters want to get all self-righteous about Jim Riggleman letting his team down, get self-righteous about making owners win, too.

Yes, Riggelman’s move was about himself, but there’s positives to an angry manager  quitting rather than poisoning his club with anger and indifference to collect pay checks.  Didn’t he just walk out on $300K?  It wasn’t exactly a win-win move for Riggleman who sacrificed half a years’ salary. The Nats refused to deal straight with him because they didn’t feel like it.  Why isn’t his peace of mind worth something, too?  If winning doesn’t come first for the owners and MLB, why should it for their employee?  People cite Riggleman’s mediocre win record as if he isn’t deserving of some self-respect and dignity – two qualities you still have to fight for in the American workplace.  The Nats’ owners and MLB run that franchise to make money.  Fans who want to win basically have to get lucky in DC, because very few people are behind them.