Is there a less dignified place for a 40-something gent (who may or may not be Bruce Arena’s successor with the U.S. National side) to be spending his time than a hopelessly oversubscribed social networking site? (link courtesy The Offside) 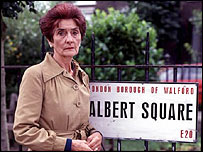 In addition to claiming not to know who Kurt Cobain was, former QPR / current Plymouth Argyle manager Ian Holloway takes peculiar interest in the long-awaited small-screen pairing of Dot Cotton (above) and David Beckham.

I’d love to see her face when he takes off his clothes. She might have a stroke – if she can reach!

(I suppose it’s all in the timing.)

Newcastle have lost the services of Kieron Dyer prior to tomorrow’s clash with Charlton Athletic, the midfielder suffering a left eye injury in what’s being described as “a freak accident.”

Di Canio : “All We Need To Understand Each Other Is A Look”

Bondy : Why No General For Sam’s Army?