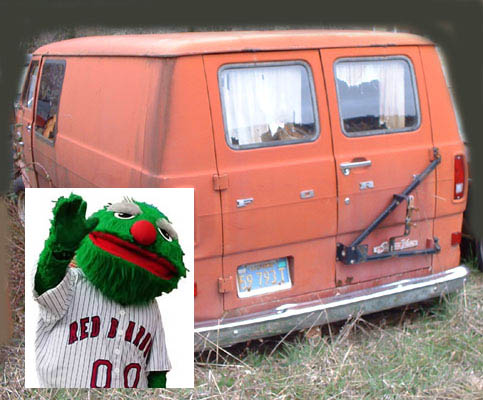 Scranton, Penn. resident Jay S. Hastings, undoubtedly better known as Scranton/Wilkes-Barre Yankees mascot “The Grump”, was arrested Saturday night at the Wyoming Valley Mall when the internet date he had arranged turned out to be with law enforcement officials and not a 14-year-old boy as planned.

The Green Monster clone’s “talent” was lured by police in a sting operation on March 22 and 27, in which Hastings described various sexual acts to police officers posing as a 14-year-old boy over instant messenger.

According to the Times Leader:

A general conversation took place for several minutes with Hastings telling the fictitious boy his age, and saying he had to be careful because he knew police pose as children in chat rooms.

Hastings agreed to meet the boy near the mall™s food court at about 9 p.m. Saturday. He told the boy he would be driving the Scranton/Wilkes-Barre Yankees van.

Though there is nothing funny about the time-honoured tradition desperately sick pursuit of young boys by sports mascots, at least the Yankees recently changed the AAA-affiliate’s name from the Red Barons, thus clarifying exactly which organization‘s good name the “Grump” was sullying.

3 thoughts on “If The Scranton/Wilkes-Barre Yankees’ Van’s Rockin’, Don’t Bother Knockin’ (Unless You’re the Cops, That Is)”