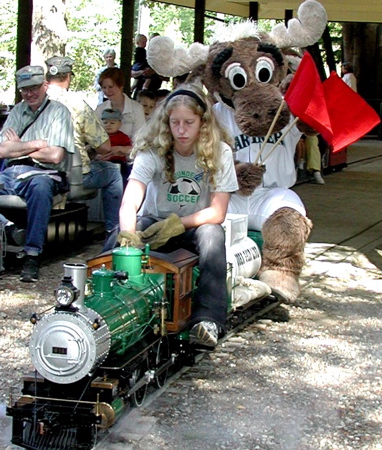 Mascot driver licensing procedures were once again called into question at Safeco Field yesterday, as the Seattle Mariners’ mascot, the Mariners Moose, nearly ran down Boston’s Coco Crisp in an all-terrain vehicle.

The incident had disturbing shades of the Tennessee Titans mascot mishap of nearly one year ago, in which New Orleans’ Saints quarterback Adrian McPherson was charged by a mascot-manned golf cart.

“I’m sure he didn’t mean to take me out,” said Crisp to reporters after he was clipped by the Moose-piloted ATV in the middle of the fifth.

The incident came in the middle of another demoralizing Mariners loss, this time 9-2 down to the Red Sox as Josh Beckett collected his 14th win. Crisp, who scored twice in Sunday’s game, RBI’d and made a dramatic diving catch, would have been a good man to take out.

From the Seattle Times article by Steve Kelley:

“Why do crazy things like that always happen to me that you people always want to talk about?” Crisp asked…

“I was told it looked like something from ‘Naked Gun,’ ” said manager Terry Francona, who was in the clubhouse at the time.

Crisp was clipped on the knee by the cart and staggered for a second, but didn’t fall. Instead of getting mad, or even, Crisp played along with the gag, faking like he was going to throw his glove at the offending Moose, before running out to center.

“I’m not an angry person,” Crisp said. “I’m not going to run over and go clothesline the guy.”

2 thoughts on “Mariners Attempt Murdering Opposing CF With Wayward Motorbike, Fail at Even That”