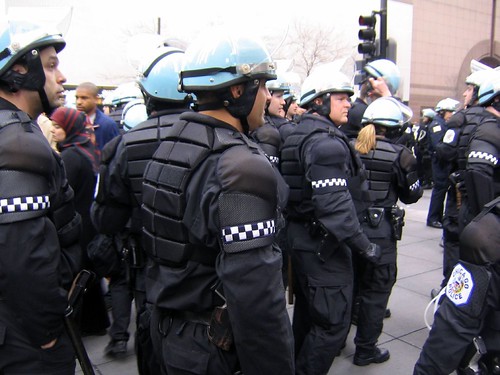 From my vantage point in LA, it’s hard to determine what’s going on outside Tribune Tower this afternoon, as the city awaits the explosive verdict from Major League Baseball on Milton Bradley’s 2-game suspension.  It arrives on the heels of a game-changing HR Bradley hit last night to pull the Cubs ahead of the Padres in a 6-2 win at Wrigley Field.  Bradley has said repeatedly that he’ll accept whatever comes.  No such promises of orderly behavior have come from the Trib staff should baseball reverse the Bradley suspension, thus invalidating four months of attacks on MB that refer to him as a “nut bag.”   The Trib‘s beatdown of Bradley seems to be failing, as he received some of the first cheers of his career as a Cub last night.  Irrational, unpopular, always complaining of imagined injustices, Bradley the Trib staff is a powder keg waiting to go off.

How bad has has the media been to Bradley?  So bad a new word has been invented to describe their presence in the Cubs clubhouse.  As Paul Sullivan writes of Bradley:

He appears much more comfortable on the road, where he’s not afflicted with “Cubstrophobia,” the fear of being trapped next to the Chicago media in the cramped Wrigley Field clubhouse.

Fred Ex : Matchmaker To The Stars