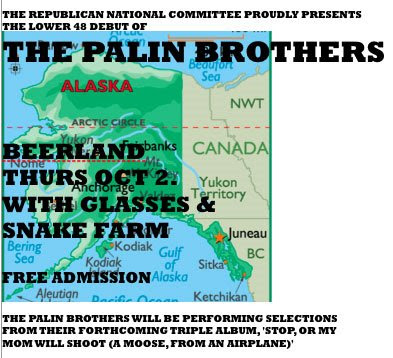 The HuffPo’s Suzy Shuster has made one prior CSTB appearance, in a roundabout way. Occasion numero two is a little more substantial, in which the smarter member of the Eisen household writes of GOP vice-presidential nominee Sarah Palin, “did one thing irritate you more than any other ‘Aw, Shucks,”You Betcha,’ ‘Say it ain’t so, Joe’ moment during the debate?”  Well, other than all the lying, yeah, several things.  For Ms. Shuster, however, Palin’s most notable offense came “when for seemingly the millionth time, Sarah Palin trotted out her piece de resistance, her favorite prop of this campaign season: her five and a half month old son Trig.”

Why is this child up so late every time there is a camera op? Why isn’t this baby sleeping in a crib or bassinet somewhere with a sleep sheep or some other sound apparatus lulling him into night-night? Is it just me or does it seem like she carts this poor child around like a living breathing example of how wonderful a mom she is? After all, she’s more than adopted the “I’m just a mom, just like you moms out there, America” attitude.

But the truth is, if she was just like all you other Moms out there, America, then she’d know the best thing she can do for this infant is to make sure he is tucked safely in his bed and out cold at eleven pm. And please don’t say well, maybe she doesn’t have anyone to watch him. Believe that, and I’ve got a Bridge to Nowhere that I want to sell you.

My point is, if Palin is going to keep shoving the motherhood card down our collective throats, maybe she can start being a mom again and stop using her own kid for political gain.

This Is What A (Previously) Uncommitted Voter Looks Like

Political Leanings Aside, Can We All Agree That Bill Murray Looks TERRIBLE?

One Boy’s Passion For Sucking Machines

4 thoughts on “Rich Eisen’s (Much) Better Half Vs. Gov. Palin’s Miracle Baby”