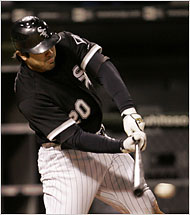 It’s notable enough that Mark Cowley’s piece on the enigmatic Carlos Quentin in today’s Sun-Times features numerous quotes from the normally tight-lipped Jermaine Dye.   After all, if you collected the combined published utterances of the World Series MVP and laid them end to end, you’d barely get halfway across 35th Street.   Outside of yelling at Orlando Cabrera for SB attempts on Dye’s 3-1 counts, it’s tough to picture JD jawing it up in the dugout – or anywhere – last year.

So how much of a cipher must Carlos Quentin be for Jermaine Dye to blow half his 2009 season quotes on Q’s odd behavior?  Apparently, they teach cipherin’ at Stanford:

The latest hope resides on the South Side. He is 26 years old and has GQ looks, a Stanford education and a lethal bat.

One problem: He wants nothing to do with it.

Quentin is by no means gruff with the media or teammates. He has friends on the team — outfielder Brian Anderson and third baseman Josh Fields, to name a few. But to do a story about Quentin, well, shoot up the Novocain and start pulling. There’s a lot of ”reaching potential” and ”striving to get better” talk.

As far as getting beyond that and understanding the man? Good luck.

”Uh, I’m trying to do it in one word,” fellow outfielder Jermaine Dye said when asked to describe Quentin. ”I would say a great guy who can be strange and sometimes doesn’t know how to control his emotions. But he’s a great player, no doubt. He’s had success now, and he wants to build off of it, wants to do more. But strange. He’s a strange guy. ‘Strange’ is the word.”

With the hours he spends in the batting cage and doing dry swings, Quentin seems to be chasing perfection in a game where perfection is impossible to achieve. Once he begins his routine of swings, forget about talking to him. That goes for everyone.