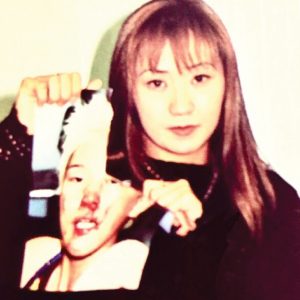 More than 4 years have elapsed since Unholy Two’s ‘Talk About Hardcore’ rendered what was left of the nation’s alleged “noise-rock” milieu as obsolete as the Alfred P. Murrah Federal Building. Though naive, feeble competitors struggled to keep up during that period, Unholy Two instead retreated to their Columbus, OH compound where the exhaustive attempts to top a universally-acknowledged masterpiece began. ??

Nearly 51 months (and hundreds of dollars) later, the duo of Chris Lutzko and Kellie Morgan-Lutzko) —– have re-emerged with the 3rd Unholy Two album, ‘The Pleasure To End All Pleasures’. Putting the O NO in “monolithic”, the Lutzkos have made zero concession to past or present notions of rock, underground or otherwise. With scattered allusions to some of history’s most malignant figures (Peter Kürten in the album title, Chris Benoit in “Master Of The Crossface”, the Rev. Jim Jones in “Let The Night Roar”, Godsmack in “Woodstock ’99”), the two guitar onslaught sounds closer to two hundred. The end result is nothing short of musical obliteration and the most fully realized documentation of this band’s nightmare vision.

preorder from 12XU or Bandcamp.

Since the mid 1990’s guitarist/vocalist John Schooley has been performing CPR on a succession of raw musics — as of this moment in time, he’s the only person who can claim to have been a member of the Crypt, Goner, Sympathy For The Record Industry and 12XU rosters, which either qualifies him for a plaque or combat pay. While this label presided over projects as idiosyncratic as Schooley’s acoustic collaboration with Walter Daniels (2014’s ‘Dead Mall Blues’) or the electric Meet Your Death (2016), neither are sufficient preperation for John’s other one-man project, Rocket 808.

An ingenious mix of 1970’s analog drum machines with raw guitar, this is less of a style clash and more akin to a minimalist tour de force. Like Suicide adding Link Wray as a third band member, Rocket 808’s debut single is an incadescent, noirish hint of what’s in store for a full-length album in early 2019.

preorder from 12XU.bigcartel.com or Bandcamp

From The Mailbag (Someone Else’s)