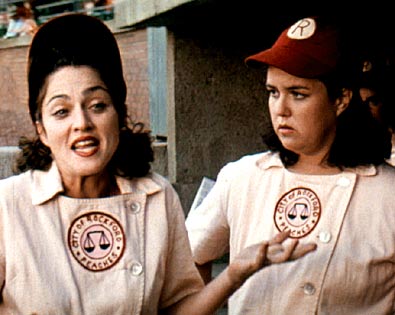 [After a century of white male hetero fail, even homophobic Cub fans will welcome lesbian ownership.]

If the Cubs aren’t anywhere near the post-season this year, they can at least claim the title of the most progressive ballclub in MLB.  The Windy City Times reports that new Cub owner Laura Ricketts is the first out lesbian to own a major league baseball team.   Forget how far to the cultural left this puts the Cubs compared to their former Tribune owners, it now pushes the Cubs to the left of expedient Sox fan President Barack Obama.  Obama’s  been dragging his feet on Don’t Ask Don’t Tell policy in the military for two years and has been against same sex marriage for (almost) forever.  Laura Ricketts works with Lamba Legal, a group that fights for gay rights nationwide.  The weird thing is, while Obama would have issues with the Trib and the new pro-gay rights Cub agenda — rightwing neo-con and pro-gay marriage father of a lesbian, Dick Cheney, was as comfortable throwing out a first pitch for the conservative Trib Co. as he would for the big money pro-gay Ricketts.  As The Windy City Times reports:

Among the purchasers is Laura Ricketts, a lesbian who now becomes the first out individual to own a professional sports team, according to MarketToMarketLLC.com. According to ABC7Chicago.com, Laura, who lives in Chicago, is a member of the board of Lambda Legal, a national organization fighting for gay rights”including same sex marriage.In an interview with MarketToMarketLLC.com, Laura Ricketts, who has a partner, said, “I came out to my family I would say early to mid 30’s. I think for a long time I wasn’t really out to myself growing up in Omaha, Neb., to a Catholic conservative family. It took me a while to come out to myself and not long after that I came out to them. I think that it really couldn’t of been a better experience. They were all immediately supportive. … I have been really really fortunate in that regard.”

Pete, Todd, Tom and Laura make up the board of directors, with Tom as chairman, NBC.com added.

The Ricketts have been outspoken about their quest to have the Cubs win the World Series, a feat the team has not achieved since 1908.

CHB To Pink Hat Nation : Where Were You When We Were Shit?

Yanks Victimized By Another Taint(ed) Call