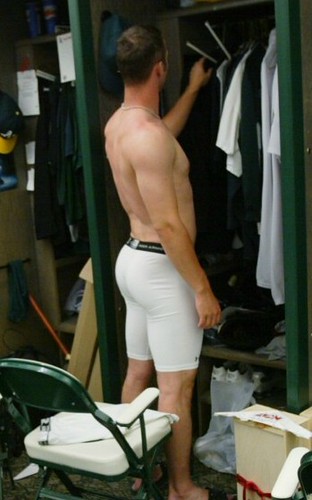 The 1st “ Dodgers 2, Cubs 0:  The 1st has The Cubs come out swinging and waiting for what they want.  Derrek Lee knocks in a double and Aramis Ramirez walks.  Geo Soto took Kuroda for a full count before leaving two men on, and that’s not good.   Btw, if I get distracted tonight, it’s cause I’m watching my two-year old son Archer while my wife sleeps off a cold.  He’s watching Cars, as I don’t want him to see his father cry.  Dodger 1st:  James Loney moves Manny Ramirez and Russell Martin around the diamond (despite an overly cautious bit of base running on Martin’s part) when Harden gave up a hit to James Loney just when he did not want to give up a hit to James Loney.  Uh .. can we get a do over?

Top of 3 and the Dodgers scouting clearly says to get Soriano chasing pitches outside and Soriano clearly needs to get TBS on and listen to that shit, cause he is going for it.  Mike Fontenot, with 2 out, chips a base hit of Kuroda.  Wow, that cutaway shot to Soriano and Edmonds sulking in the dugout is killing me.  Derrek Lee knocks a single into the outfield, putting two Cubs on again.  Kuroda v Ramirez, and Kuroda really thinks everyone will chase outside. Ramirez grounds into the 3rd out.  I can’t drink in front of the kid, I just can’t  …goddammit, someone gets to have illusions.

[Iron Man Harden’s oft-repaired arm … will hold it for six solid innings of use?]

Bottom of 3:  Rafael Furcal opens for a lead-off double, followed by a wildly inept pick-off attempt by Harden (error charged) and tumble by Mike Fontenot that has MF walking off the pain with the Cubs’ trainer and Piniella on the field.  That would figure, the one guy who can hit for the Cubs in post-season gets hurt … I may as well take this moment to review one of the rules of Major League Baseball.  A team which falls behind in runs must score more runs than the opposing team in order to win the game.  I mention this in passing to the Cubs line-up, merely as a time filler.  Finally, Lou Piniella has taken CSTB advice to heart and walks Manny Ramirez.  Dodger fans boo it, but they may recall this specific play in the 10,000 times their bums walked Barry Bonds.  Dodgers are retired via some decent fielding (excepting the Fontenot error) on two big pop flies to Edmonds and De Rosa, leaving two men to dangle.  That “Viva Viagra” commercial is on again, which doesn’t say much for the average baseball fan, not to mention golfers, demographically speaking, when  the caption “see our ad in Golf Magazine” appears.

Top of 4, Soto doubles “ Edmonds grounds out to move Soto to 3rd “ Kuroda returns the favor of the intentional walk, to Ryan Theriot, in order to get tough with Rich Harden.  Piniella isn’t pulling Harden for a pinch-hitter yet.  It’s early, but this may be a mistake.  The Cubs have a deep bullpen and weak bats in this series and we’re 90-ft away from runs … Harden strikes out swinging, leaving two more men out there like .

Bottom of 4/Top of 5th:  So many questions … Celeb round-up at the Ravine includes Yankee fan Billy Crystal (no team gear worn), along with Jon Lovitz and Rob Reiner in Dodger Gear.  Cub notables include Vince Vaughn in a Cubs hat and retired A’s ace Dave Stewart in a Blackhawks cap … is he running for an alderman seat in Chicago?  Why the neutral team wear?  Did Harden just get a lead-off out?  Did Harden just sit down the second out in a row (De Witt)?  Oh my God, was that a 1-2-3 inning?  If not for the Frank TV commercial that followed it, it may be the best ten minutes of post-season baseball I’ve seen so far.  Am I the only one watching who has to guess who this impressionist is trying to “do” half the time?

Bottom of 5 … Manny gets walked again “ Harden gets pulled for Sean Marshall?  I’d prefer Chan Marshall.  This is a final play-off game.  Might I mention Carlos Marmol, Kerry Wood, Ted Lilly … what am I missing?  Talk me down … thank God Archer’s getting his bath and I can throw things in the living room with impunity.

Top of 6 … SI‘s Tom Verducci backs up my 3rd inning note of pure dejection visible in the Cub dugout.  No one can say to Soriano, “Sit-the-fuck-up and act like you came to play?”  The Cubs have come back in a lot of late inning wins, but that was when they wanted to win.  The Cubs go down in a show of support for Mr. Kuroda they have not given to Mssrs Harden or Marshall this evening.

Top of 7:  De Rosa grounds out to lead-off … Theriot singles … Fukodome pulled off the bench and he singles off Kuroda, recalling the effectiveness last May of Fukudome intimidating Takashi Saito at this very Ravine … Torre pulls Kuroda, and one prays for a break, a prayer Soriano answers with a pop fly easy out … 2 down as Mike Fontenot arrives at the plate … my break comes in a wild pitch to Fontenot that brings Theriot to 3rd … it’s here that baseball has to break someone’s heart … and it’s mine, as Fontenot sends a long fly ball to Mr. Matt Kemp.  The Cubs, the record will show, have had their opportunities.

commercial break:  At least Cars ends well for Archer, every single time, and I am still convinced he should be raised anything but a Cub fan … I can drink now, the little guy is asleep and dreaming of Lightning McQueen while I am stuck with Sulky Soriano … A friend asked me today if I thought the OJ verdict will help or hurt Obama in any way.  I don’t know, I hope not, but I have been wondering the same thing about the Miller High Life guy all season …

[The Miller High Life dude, helping or hurting in the battleground states?]

Top of 8 … Cubs bring Derrek Lee home to get 1 on the boards … Jonathan “Big Boy” Broxton brought in to shut the Cub gasp down by striking out De Rosa (can’t wait to read De Rosa’s I Take Full Responsibilty blog posts on this one) … That the Cubs face the Dodgers tonight brings to mind the 1955 Brooklyns and their slovenly win over the Yankees in that World Series “ the Bums’ first championship ever.  Sooner or later the Cubs will find that break, with themselves and the tangible intangible of team history … but it will take a psychological break of that size.  Going into the series, the Cubs and Dodgers franchise tally was 1012-1012, dead even.  Still, the Dodgers have won half a dozen championships since (or thereabouts).  What does it take to make that break?  Whatever it is, it means everything.

[The 8th: LA’s Big Boy, Jonathan Broxton, serves it up and shuts it down]

Top of 9: Jonathan Broxton, who tips the scales at a David Wellisian 290-lbs on the Dodgers official web site, now has ownership of the mound and strikes Ryan Theriot out … Could Fukodome redeem his second half of 2008 by getting on base … NO.  He grounds out for two down.  Soriano takes one down the middle … swings for the second strike … strike three, and I have a long list of names I need to alphabetize for finger pointing.  I mean seriously, Zell’s blowing the Tribune pension fund for this?

The Dodgers being my local team and second place favorites in my heart in the NL, I wish them well, especially if they kill of the Brewers.  Just not tonight.  The Cubs had their shots, lots of them, and failed to capitalize on almost any of them in this Series.  No wonder believing in Curses is comforting.  TBS shot callers kept repeating the words “stunning” and “upset.”  Sure, on paper, but not at Wrigley Field, where Cub fans let the world know they had no faith on day one.  Too bad.  There’s lots to be impressed with in the Cubs of 2008, but I’ll think about that tomorrow.  Actually, I’ll be thinking about that all winter.

From The Desk Of Randy L. : In The Drive For World Championship Number 28, I’m All-In