From the AP (link taken from Boing Boing) 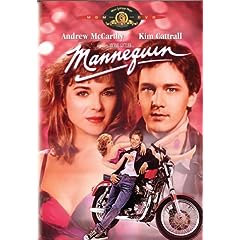 A man who has a history of smashing windows to indulge his fetish for female mannequins could draw a long prison term for his latest arrest. Ronald A. Dotson, 39, of Detroit faces up to life in prison if convicted of a charge of attempted breaking and entering at a cleaning-supply company in the Detroit suburb of Ferndale.

The potential life sentence is because prosecutors charged him as a habitual offender. Authorities say he has at least six convictions for breaking and entering and a stint in state prison over the last 13 years.

Ferndale District Judge Joseph Longo ordered Dotson to stand trial following a preliminary examination on Thursday, The Daily Tribune of Royal Oak reported. The judge ordered him jailed unless he posts a $15,000 bond.

Dotson was arrested Oct. 9 after police say he smashed a window at a cleaning-supply company to get at a female mannequin dressed in a black and white French maid’s uniform. He had been out of prison for less than a week.

Dotson was arrested in Ferndale in July 2000 and later convicted for breaking and entering at a women’s clothing shop to get at a mannequin in a pink dress with bobbed hair.

Ferndale police also arrested Dotson in 1993 after finding him in an alley behind a woman’s store with three lingerie-clad mannequins. He also has similar convictions in Detroit and suburban Oak Park.

I’ve seen some pretty attractive mannequins in my time (see above) and I’ve got to admit, it sounds like Dotson is getting a raw deal. It each case, it sounds as though the mannequins were provocatively attired.  Though the “she was asking for it” defense hasn’t worked out too well in contemporary times (ie. Robert Chambers, Mike Tyson), I’d like to see Dotson give it a shot, if only in the hopes that our nation’s retailers will use greater discretion in the future.

(Badly) Scooped By The MSM : A Blown Chance To Get Lusty Over Tlusty

How To Seperate The Real Fans From The Front Runners

Apparently, Clothes Do Not Make The Man

1 thought on “Statuephillia : The Forbidden Love”