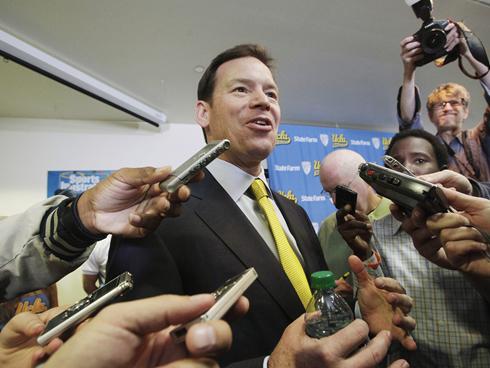 UCLA head football coach Jim Mora dropped by Roger Lodge’s KLAA program Wednesday morning and when the host quizzed him about his sales pitch to recruits, Mora replied, “it’s a safe, beautiful campus in a great area of town. I mean, we don’t have murders one block off our campus.” If that sounds like Mora was referring to the April double murder of two USC students from China during an attempted carjacking near campus, rest assured that Mora HAS NO IDEA WHAT YOU’RE TALKING ABOUT. Or at least that’s what he tells the LA Times’ Chris Foster :

“I just said our campus is safe,” Mora said. “I didn’t say anything about anyone else’s campus. I just said it about our campus. I didn’t mention another campus. We don’t have anybody getting murdered a block off of our campus.

“If anybody, whether USC or Cal State San Bernardino, is offended by the statement, then that’s their insecurity, not mine.”

UCLA is holding training camp at Cal State San Bernardino, but is not in football recruiting tussles with that university.

When told that two students had been murdered near USC in April, Mora said, “They were? I don’t read the paper, I don’t watch the news. So I don’t know that stuff.”

Cowboys’ New Scheme For Dez : A Trio Of Babysitters, No More Fun Of Any Kind

Rosenberg On The Lions’ Date With History

1 thought on “Mora To USC : If The Getting-Murdered-On-Campus Shoe Fits, Wear It”